My bathroom remodeling project is taking all my spare time, and I haven't had even a few minutes (or the energy) to upload pictures.  Unfortunately, my husband took most of the pictures that evening, and he didn't style the gown very well.  I'm sure he was focused on the face.


I was more than a little disappointed to see young women wearing super short skirts, when the dress code clearly stated "full length skirt".  After chiding myself for spending so much time on a gown that she may not have needed, I calmed myself by thinking "She is wearing the nicest dress on that stage."  She may have been wearing the nicest dress in town (on a Tuesday evening). 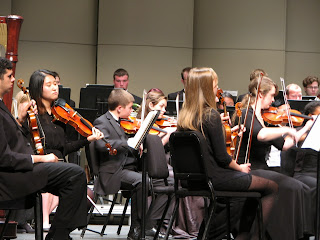 My attempts to photograph her on stage were not successful.

The sleeves: were underlined with black silk organza.  The lace was fairly substantial, and I toyed with only using lace, but felt that the organza would offer a some protection since this is a dress that will be worn many times.  I didn't want an elbow to come poking through. Also, the organza added just enough color.
I finished the seams with silk organza bias cuts that were dyed with coffee.  It's a perfect shade to blend with her skin tone, and a tad darker than a tea-stain.  Adding vinegar helps set the stain/dye in silk.  The bias strips disappear when worn.  They're not even really noticeable against the white background below. 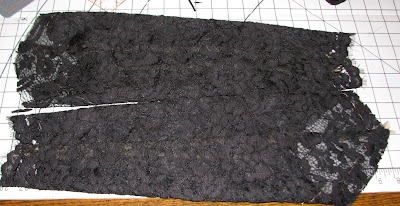 The skirt: Stephanie wanted a taffeta skirt, since she is accustomed to borrowing mine and really likes the scroop.  I suppose it's like wearing a bell around your neck: everyone hears you coming, and they turn to watch.  Or at least it's fun to imagine they are.  We considered silk taffeta, because I really like sewing with silk and Stephanie really likes wearing it.  However, we needed 7 yards for this skirt.  It's very full, and I did add eight inches to the length.  So, we are happy with the nylon/poly taffeta that I found On Sale.  The additional 8 inches were just tacked on to the bottom of the pattern.  The "lengthen/shorten here" line just was not the right place for eight inches.  Although it added a lot more fabric, for a full skirt like this one, it worked out perfectly, multiplying the flare.
Skirt lining: My internet order for the skirt lining was cancelled by the retailer late in the sewing process, so I ended up lining it with a lightweight cotton broadcloth that I had in my stash.  I had to piece it in order to get enough, but who is going to know.  (Other than you and me?)  I just couldn't bring myself to sew the icky lining that the chains sell (no Bemberg available locally).  Although the broadcloth adds quite a bit of weight to the dress, it also adds some nice volume and it's got to be comfortable to sit on cotton.

It was so much fun to see Stephanie playing with the university symphony.  I was reminded of the times that I took my little girl to the performances.  Shortly before the concert started, a large group of giggling college kids came in, sitting in front of us. My mother frowned and said "Oh, I don't what that noisy bunch sitting here."  I smiled and said "Those are Stephanie's friends from the dorm."  What could be better than your own cheering section? 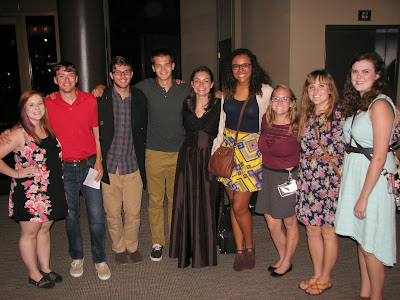 I would love to hear from you!