All is well here. I was just very busy over the past 2 1/2 years. We moved twice, remodeled one of the homes, and built a new one. Not much sewing -- at least no garments -- there were many window coverings, however.

The single item of clothing that I have to show for the last 30 months is McCall's 6332 (out of print).


Several years ago, I made a last-minute satin jumpsuit for my daughter to wear to a charity gala. When a recent event was approaching, she decided she didn't want to wear her trusty black orchestra gown again, so asked for a (last-minute) velvet jumpsuit instead.

This is the original from 2012. If she appears to be awkwardly posing, it is because the crotch is a tad short.  As I may have mentioned, it was a last-minute request and she was "too busy" for fittings.  So I guesstimated some things.  She was very, very careful when she sat down that night. 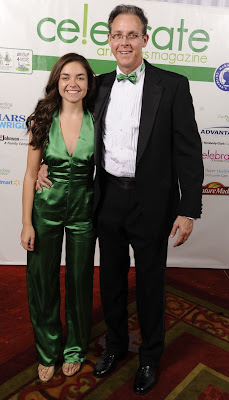 After a weekend locked in my new basement sewing chamber, I churned out a pretty nice update.  I measured carefully and lengthened the crotch by about 1.5" and FBA'd the top.  The bust could have used more fabric.  (Once again, we didn't have time for a muslin.) She could comfortably sit down this time, but had to be very careful about arm placement to keep that full bust covered.
So here we are at the big event (it was December 2017).  Yes, that's me in an ill-fitting top because I ran out of time to tailor my own clothes. The jumpsuit was a hit. And I'm back to making curtains.

Email ThisBlogThis!Share to TwitterShare to FacebookShare to Pinterest
Labels: Velvet

In Case You Were Wondering...

...about the Burdastyle dress that I began several weeks ago, I never did sew it.  After my tantrum over the Swedish tracing paper, I spent a week or two mulling (obsessing) over my possibilities and decided that I really would like to try it in a real fabric, confident that the changes necessary to fit me comfortably were not that complicated.

Unfortunately, a series of time-consuming events got in my way, one of which involved packing up everything in the "sewing room" so that our dining room was clean.

I realized that I (still) have a serious problem with acquiring sewing clutter when I filled five boxes with the fabric, patterns and magazines that sat on the table and counter.  This doesn't include all the fabric that's already filling the dining room cabinets!

Fast forward through my daughter's travel wardrobe and other interruptions and a week or two before the gala, I once again panicked with the thought of nothing to wear. I have a blue velvet dress in the back of my closet that really did spark joy when I cleaned my closet last spring.  It is lovely and comfortable, but sleeveless, which is why I've only worn it once in the 15 years that I've owned it.  Since it's usually freezing in December, I decided the quickest solution would be a bolero jacket.
Amazingly, I found a nice velvet that matched my dress perfectly, and a taffeta that would have been a nice complement.  Vogue 8957 recommended taffeta, dupioni and shantung, but velvet sounded so warm and cozy and comfortable.  My memories of cold winters past convinced me that velvet was necessary.  How often do you find a fabric to match perfectly, anyway?

Knowing that pleating of this magnitude would not work well on velvet, I choose to gather the trim into ruffles instead, which worked out fairly well, though it left bulky seam allowances. 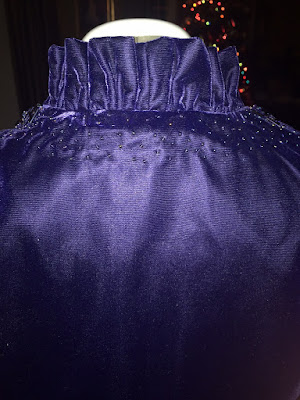 Vogue 8957 is a fairly easy pattern to fit and sew, though fitting was not as easy as I expected. I considered not making a muslin, thinking that I wouldn't need an FBA or swayback adjustment, but the velvet was rather expensive.  I justified the muslin by telling myself it would help deplete my overflowing stash.

A size 12 was perfect for my shoulder width. However, once the sleeves were on, I felt like I was wearing a straight jacket.  Adding 1.5" at the underarm seam and tapering it to the notches worked perfectly.  In the end, I was grateful that I took an extra hour to make a muslin.

Since it was so quick to sew, I talked myself into beading to coordinate with the dress.  Instead of trusting myself to make nice beaded flowers, I sewed the iridescent glass beads randomly on the jacket, which turned out fine -- it is festive, but next time I will chose a more organized pattern.  I underlined the velvet with silk organza to give it some body, and act as a stabilizer for the beading.

None of the pictures of me wearing the outfit do much to show the jacket, due to poor lighting.  To my chagrin, the flash resulted in focus on my bare cleavage.  I will spare you the discomfort, and show them on my mannequin, instead where the flash illuminates the fact that the two velvets are in fact not exactly the same.  Sans flash, and in a dimly lit ballroom they are a perfect match. 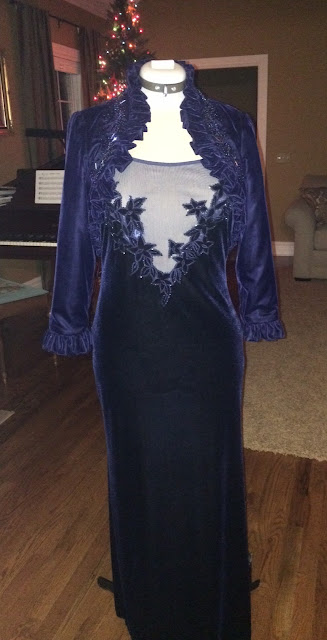 It is lined with a medium-to-heavy bodied satin (not a lining), to add to the warmth factor.  Alas, it was 70 degrees the day of the event, and I was plenty warm.

I really love the jacket.  It makes the dress wearable for me and I hope that I can find other outfits to pair it with in the future.
Posted by Su-z at 1:12 PM 4 comments: